Twitter har meddelat the next stage of testing for its new dedicated Spaces tab in the app, with a small test pool of around 500 users on iOS set to see the new Spaces button appear in their app from today.

As you can see here, the Spaces tab will take up prime position in the middle of the lower function bar, putting increased focus on Spaces discovery. Which, as we noted recently, is a key challenge for the app, because while anyone with over 600 followers can now create their own audio Space, and broadcast their thoughts around the world, in real-time, the true measure of success here will be how relevant these rooms are to each user, and the value they can add to the Twitter experience.

Which is what the Spaces tab is designed to facilitate – though at launch, as reported by TechCrunch, it won’t aim to highlight Spaces from outside of your network.

“Twitter says the tab will showcase the Spaces being hosted by people you follow, but these won’t appear like they do on the Fleet line today at the top of the Timeline. Instead, the discovery tab will present Spaces in a more visual format, similar to the promotion cards that appear when you tweet about upcoming Spaces.”

Which is interesting, because definitely, in early testing, the focus has been maximizing discovery beyond your connections in the app.

As you can see in the example on the right, which was posted by Twitter CFO Ned Segal mid last month, there’s a clear ‘Outside your network’ headline, which seemed to be what the tab was designed for.

Maybe, then, Twitter is just starting off small, to see how people use it, and showcasing Spaces from the people you’re already following is the best way to kick start that engagement and discovery behavior, before expanding it out to broader highlights.

Twitter also likely needs to work out its algorithm matching to ensure that the most relevant Spaces are highlighted here – because if it doesn’t rope you in, by highlighting Spaces of relevance, it could quickly become an entirely useless addition very quick. And Twitter won’t want to take that risk, particularly when adding a new tab to the app, which is a big step for the app.

The last time Twitter added an extra function tab was for Moments back in 2015, and it made a massive deal, at the time, about adding the extra button. 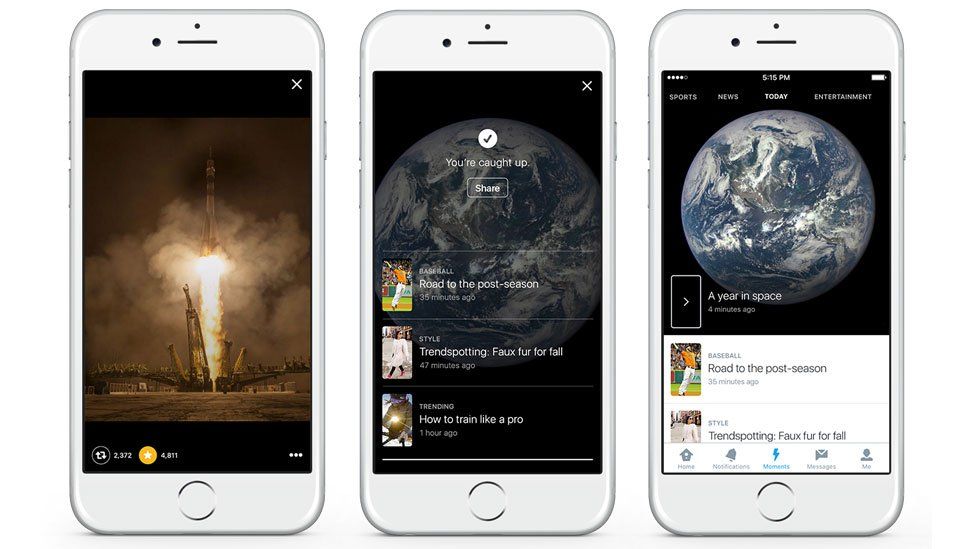 Much was made, when Moments launched, about this being a fundamental change in approach for the app, which had long been hesitant to implement any major functional additions, with the Moments button being a key part of that push. And then, when Moments failed, Twitter reverted back to the simple, four tab approach, with many in the company looking to simplify the app as much as possible in order to make it easier for new users to understand.

Which is why adding new tabs remains a point of contention, and why the addition of a dedicated Spaces tab underlines the potential that Twitter sees in its audio meeting tools.

Which could end up being a significant complement to the tweet process – but then again, maybe it was just a fad, maybe people don’t really care about digital conference calls with strangers, and will move on from them as COVID restrictions ease.

The key, again, likely lies in just how relevant its Spaces recommendations can be, and how valuable users find the new tab. If there’s a heap of good, personally engaging stuff in there, where people can easily tune in, it could be a great accompaniment, and a handy reference point when you want to listen to a live chat. But if it’s just randos chatting about unrelated topics…

In addition to the new tab test, Twitter is also expanding its roll out of its purple rings around user profile pictures in timelines when they’re engaged in a Spaces session.

our goal is to get folks to the right Spaces of interest in any environment.

now on iOS & Android, you will be able to join a Host’s live space (or any Speakers on the mic) from their profile by tapping the purple ring. pic.twitter.com/KS4H9IAe3W

That could help to further boost Spaces exposure, while also making it a more valuable engagement consideration for brands and marketers, by highlighting connection opportunities in the app.