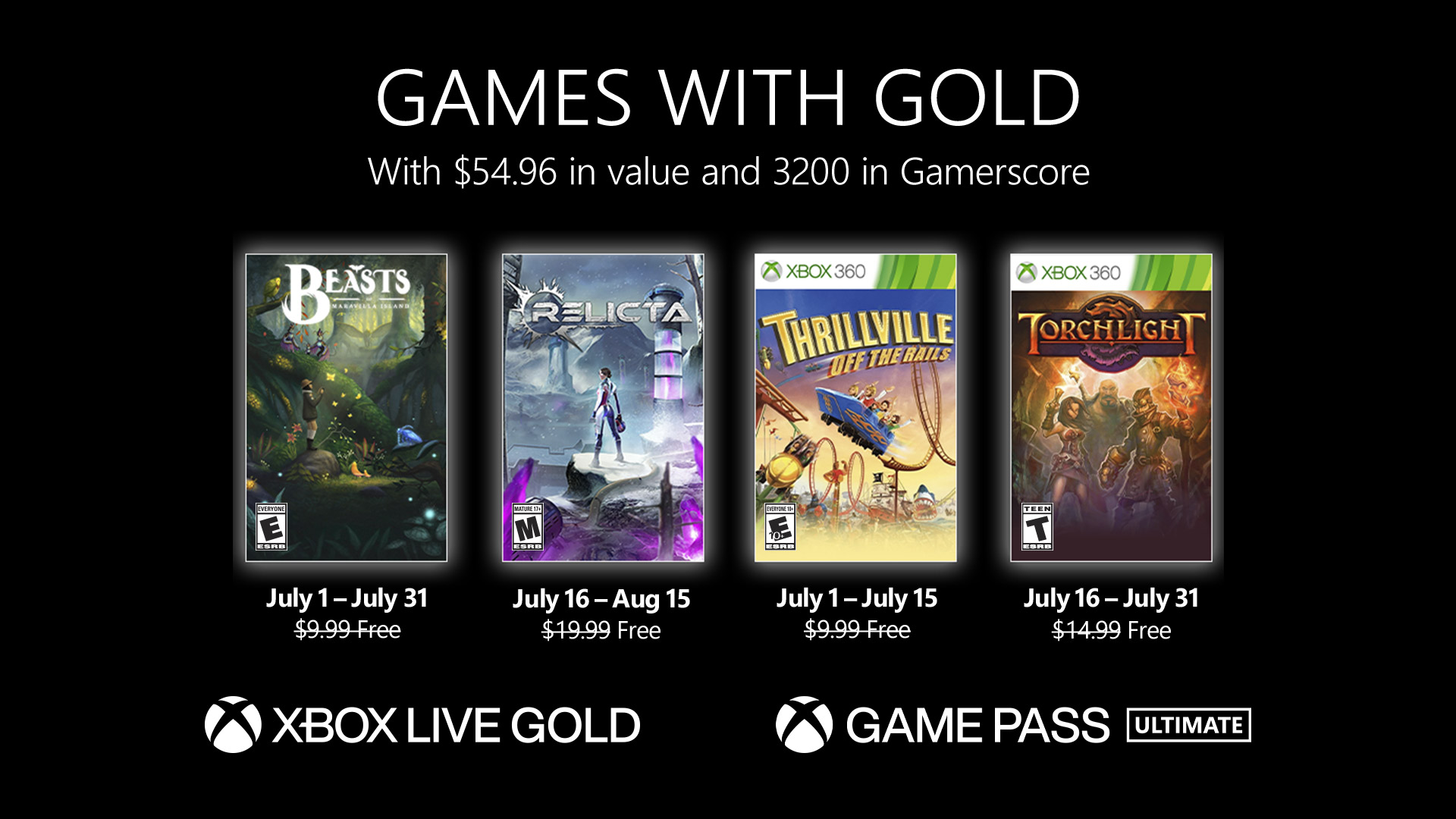 It’s time to announce the July Games with Gold lineup! On the Xbox One and Xbox Series X|S, capture photos of the wondrous Beasts of Maravilla Island, and survive being stranded on a desolate moon base in Relicta. And for our classic lineup via Backward Compatibility, build and ride rollercoasters in Thrillville: Off the Rails, and roam dangerous dungeons in Torchlight.

Xbox Live Gold members will have exclusive access to these games for a limited time as part of Games with Gold. So will Xbox Game Pass Ultimate members, who receive all the fantastic benefits of Gold plus access to over 100 high-quality games with Xbox Game Pass.

Unlock the wonder by taking pictures of the elusive and beautiful creatures on a mysterious, dreamlike island. Explore a 3D jungle teeming with unusual and playful life. Climb, explore, and solve puzzles. Use your grandfather’s journals and his trusty old camera to snap pics of otter-crocodiles, birds disguised as bananas, and much more. It’s up to you and your photographer’s eye to help share Maravilla’s magic with the world.

Play as a physicist stranded on an eerie derelict moon base. Find your way by bending gravity and magnetism to your will. Buried in the darkness of the lunar craters is a secret that might claim your daughter’s life or change the fate of humanity forever. Solve puzzles in a game where every corner holds a mystery and each step is a challenge.

Thrillville: Off the Rails

Design and run your own theme park! With five new parks and 100 new missions, you’ll need an all-day pass to enjoy this much fun. The best part about creating crazy rollercoaster rides is you get to ride them as many times as you want.

Hack and slash your way through dungeons galore. Choose from among three character classes as you roam from the center and safety of the town of Torchlight into randomly generated dungeons to battle hordes of monsters and collect lots of loot. You’ll have a trusty animal companion at your side as you take on main quests, side quests, battle big bosses, and chat with the denizens of town.

Read more about our Games with Gold program here and stay tuned to Xbox Wire for all the latest news on Xbox. Like we said before, if you’re an Xbox Game Pass Ultimate member, you get all the benefits of Xbox Live Gold, over 100 high-quality games you can play on console, PC, and across devices from the cloud, and access to EA Play at no extra cost. New games are added all the time, so you’re never without something new to try when you’re looking to find your next favorite game. If you’re new, or if you’re an existing Xbox Live Gold and Xbox Game Pass for Console member, join or upgrade today for just $1.

The Xbox App is Available Today on Samsung 2022 Smart TVs

Bow Down Before the Beat! Music and Gameplay Become One in Metal: Hellsinger 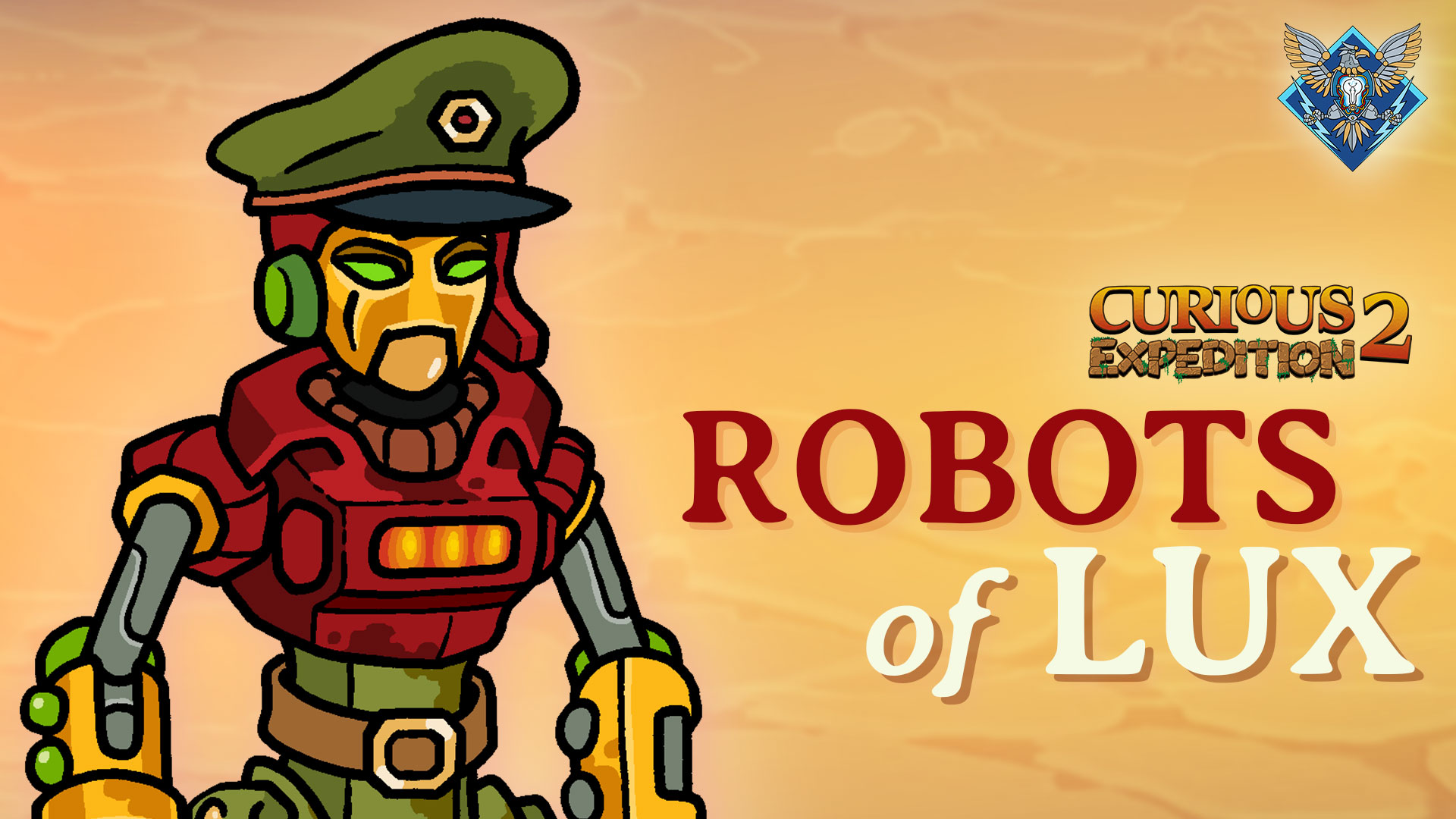 The passion that SteamWorld fans have for the many fantastic titles our talented team at Image & Form have released over the years, along with the excitement for upcoming games like SteamWorld Headhunter, has always been clear to me and everyone else at Thunderful. That’s why it’s so cool to get the opportunity to talk to you about how the SteamWorld universe is coming to Curious Expedition 2 in the new Robots of Lux DLC. It’s also a wonderful chance to introduce many of you to our popular and ever-growing narrative roguelike Curious Expedition 2!

The story here starts with the troublesome experiments of Lux Lab’s Edibot who has accidentally torn a hole in the universe. Fortunately for us, that results in sucking in some characters from SteamWorld and bringing them to the Jules Verne-inspired world of Curious Expedition 2. These new explorers bring oil, smoke and steel to a mysterious world waiting for you to uncover its spectacular sites and secrets. If you love SteamWorld Heist as much as me, then you’ll be equally delighted to hear that this includes the addition of Captain Piper Faraday, as a playable explorer, along with the Naturalist, a brand new character with some very fun abilities.

The naturalist character brings a fun new power to the table, allowing you to tame the unusual and dangerous wildlife (and yes, that includes a giant crab) that you encounter while exploring using Edibot’s new Luxballs, offering you the potential to fundamentally change your approach to each adventure.

And that’s not all! Along with these two new explorers, Robots of Lux adds three new recruitable humanoids: two more SteamWorld favourites in the form of Billy Gill & Valentine Butterbolt and a white hairy giant, the Yeti. There’s also a new recruitable and mountable Robot Chameleon, a new Paris location, new equipment and new items. This makes the DLC both a real treat for fans of the SteamWorld universe and yet another substantial addition to Curious Expedition 2’s fascinating world, roster of characters and expanding systems.

In fact, here’s a full list of everything included in Robots of Lux for you:

I can’t wait for SteamWorld and Curious Expedition 2 fans alike to experience this new content for themselves. And if this is your first exposure to Curious Expedition 2, let me assure you that there’s a world of possibility ahead of you! Discover treasure, choose whether you seek out the legendary Golden Pyramid, or recover the legendary Rainbow Orchid, meet new cultures and encounter all manner of fauna and flora in a world of surprises that delivers new adventures every time you play. Happy adventuring!

The exploration roguelike of Curious Expedition and the robotic pirates from SteamWorld Heist come together for the best collaboration of the industrial age.

Pushing the boundaries of engineering and science, the ever-inventive nature of Lux Lab’s Edibot has torn a hole into the SteamWorld Universe and sucked in some fitting explorers along for the ride. Take control of everyones favourite steam-powered Pirates, Captain Piper Faraday and her mechanical motley crew.

Not to forget the living, take the new Naturalist expedition leader out on your next voyage. The Naturalist has the power of taming the wildlife and this new ability will change the way to approach each adventure and really gives your encounters a wild twist you never knew you wanted.

This collaboration DLC also features brand new recruitable characters, a new Paris location, new equipment and new items. Once the DLC is activated it will expand possibilities across the entire game, both in Campaign Mode and Director Mode.