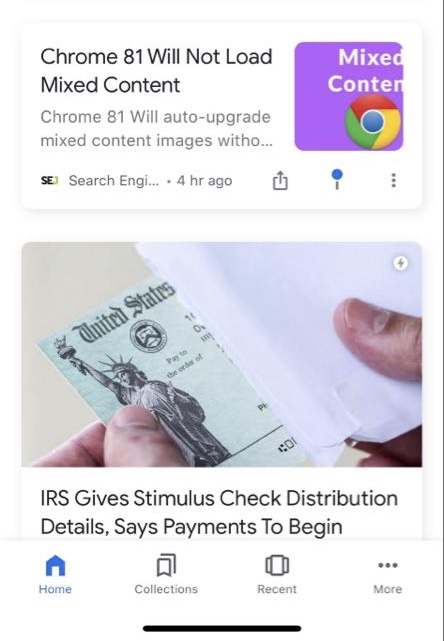 Actually, this topic was brought up several times over the past couple of weeks.

It’s been the subject of an ongoing discussion between Mueller and our lead developer, Vahan Petrosyan.

Petrosyan first brought this issue to Mueller’s attention in a Webmaster Central hangout on March 31.

Mueller was asked whether it’s possible to have large images in Google Discover without utilizing AMP.

Petrosyan mentioned the fact that, even when all criteria is met, Discover does not consistently display large images for non-AMP pages.

Here’s the difference between a thumbnail image and a large image in Discover. According to the official Google Discover support page, there are two ways to enable large images for web pages:

Why, when all boxes are checked, does Discover still not display large images for regular web pages?

To get around the issue of large images not being displayed, Mueller suggests using the relatively new max-image-preview robots meta tag.

Here’s Mueller’s full response when asked if large images can be displayed in Discover without AMP:

“Yes. I think they want to move away from that form, and another option you can do… is to use the max image preview robots meta tag where you can specify, I think, “large,” as the large preview image. That would also apply to Discover.”

Petrosyan, our developer, applied Mueller’s advice and continued to run into problems.

Fast forward a couple of weeks.

Petrosyan began utilizing the max-image-preview meta tag to no avail.

Petrosyan pointed out some inconsistencies with an example of two CNN articles displaying large images.

The screenshot below shows both an AMP article and a regular article with the same size image. Mueller was once again asked about this during the Webmaster Central hangout on April 14.

In response, Mueller simply said the issue is being looked into but there’s no new information to report right now.

Mueller adds that work is being done to make information regarding the criteria for large images more clear.

This issue has also prompted the Google Search team to be more consistent internally with how these issues are dealt with.

If your site is affected by this Google Discover issue as well, the only thing we can do at the moment is hang in there and wait for a fix.

“We’ve been looking into that and there’s some work being done from the team to make the information a little bit clearer, and to be a little bit more consistent internally with how we deal with those kinds of issues.

So I don’t have a complete update for you yet but people are working on it so hopefully we’ll have something soon.”