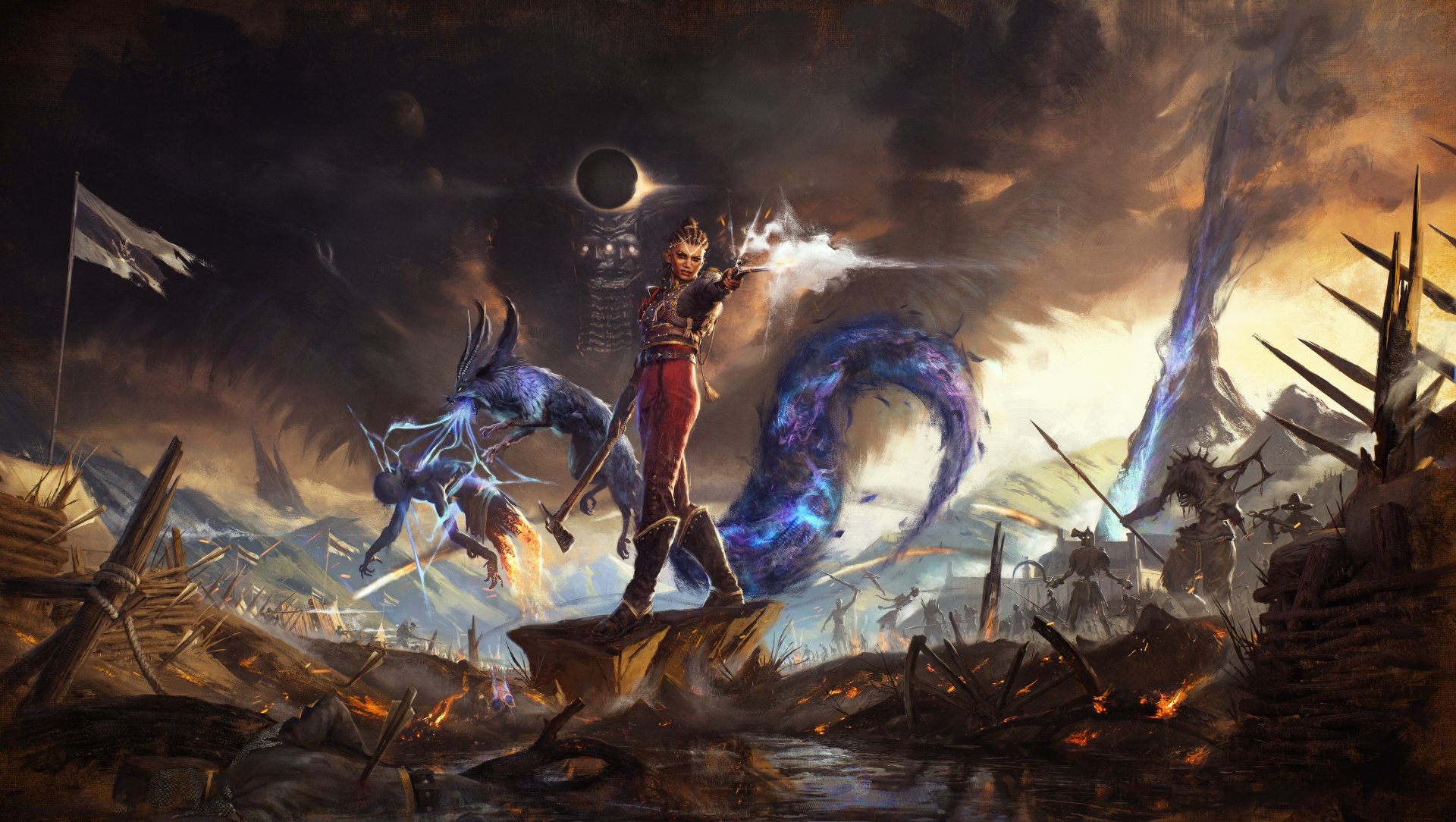 Hey everyone! Our studio’s first game, Ashen, was released back in 2018 and we’ve been so excited to talk about what we’ve been cooking up next.

Today, I’m thrilled to give you a first glimpse of Flintlock: The Siege of Dawn, our brand-new game and the most ambitious project for our studio to date. It’s coming later this year to Xbox Series X|S and Xbox One and it’s also going to be available on day one on Xbox Game Pass!

Flintlock is an action RPG that takes place in a world ruled by old gods. Though absent for thousands of years, they are back. With them opens the “Door to the Afterlife,” making way for their army of undead to escape from within. As they overrun the world, humanity is left teetering on the brink of extinction.

You’ll take on the role of our hero, Nor Vanek, a member of the coalition army who has a personal vendetta against the gods. But your journey doesn’t take place alone, along for the ride is Nor’s mystical companion Enki, a strange fox-like creature gifted with magical powers. Driven by vengeance, together you’ll lead mankind’s final siege and explore an open world, travelling through desert sands, cavernous ruins, and towering cities that are bursting with secrets.

What’s exciting about the game’s setting is that it is inspired by the flintlock fantasy genre, and combines black powder weaponry and technology, with dark magic and powers of old gods. In our story, humanity is armed with gunpowder and for the first time they find themselves with the power and tools to prevail over the most powerful beings in creation. It’s going to be the ultimate clash of gods and guns and we’re crafting a vast gunpower and magic fueled battlefield to embrace and really leave your mark on

If we’ve piqued your interest so far, here’s a sneak peek at Flintlock in action:

We can’t wait to show you more of the game soon, so stay tuned to Xbox Wire and subscribe to our social media channels to stay up to date with the latest news on Flintlock: The Siege of Dawn.

Huddle up Madden NFL fans! The NFL season has arrived and this month football fans can hit the gridiron early with Madden NFL 23. EA Play members will have a 10-hour Early Access Trial of the game on August 15 – three days before release! Offer starts at 7AM PT, August 15, 2022 for EA Play members only. With early Madden NFL 23 access, you’ll experience brand-new gameplay features including the game changing impact of FieldSENSE on Xbox Series X|S versions – a new foundation for consistent, ultra-realistic gameplay.

EA Play members eagerly awaiting for the Madden NFL 23 experience can refine and perfect their tackling skills by jumping into Madden NFL 22 now and earn member-only rewards, including the Leather Legends Gear Set and the Legends Vanity Set.

In addition to Madden NFL, there are even more great content and rewards coming to EA Play this month, including:

In addition to all these exclusive rewards, EA Play members can access a growing library of fan-favorite games via The Play List, including the 2021 Game of the Year recipient It Takes Two, as well as Mass Effect Legendary Edition – which supports 4K resolution and features enhanced visuals – and the thrilling Skate 3 and competitive MMA title UFC 4.

Play your way into the history books in Madden NFL 23!

Control your impact with every decision in all-new ways. Call the shots in Franchise with free agency and handel logic updates, play your way into the history books in Face of the Franchise: The League, and assemble the most powerful roster in all of Madden Ultimate Team™.

Face of the Franchise: The League
The League drops you into your fifth NFL season at a skill position of your choice (QB, WR, RB, CB, MLB) and you’re seeking a fresh start with a new team. Negotiate a one-year “prove-it” contract with one of 32 NFL teams and show out with great on-field performance to earn rewards and level up. The addition of New Drive Goals and Drive Summaries allow you to tweak your experience throughout a game and get feedback and rewards based on how well you play. Get performance boosts from weekly activities and training between games while Madden Ratings Adjustor Chad Johnson guides your career development by providing ratings updates as you strive for the highest level of prestige on your Road to 99. Will your NFL career rank among the all-time greats? It’s up to you.

Franchise
Plan and strategize like an NFL head coach with refined scouting, staff management, and weekly strategy features to take your Franchise to the top. New athlete motivations like team location and salary demands factor into contract negotiations and add to the drama of NFL free agency within Franchise. Updated Trade Logic AI represents the value of star players more accurately for fair and more realistic offers.

Madden Ultimate Team
Develop your dream fantasy roster of current NFL superstars, Hall of Fame legends, and more. Always have something to play for with the first-ever Field Pass challenge and reward tracker in Madden Ultimate Team. Play to earn MUT Champions entry tokens and choose to compete at your convenience. Simplified Set building lets you navigate your content binder more effectively so you can focus on improving your Ultimate Team roster all season.

5 Tips To Get The Results You Want

29 Reasons to Fire a Copywriting Client (Yes, It’s OK to Do!)