Snapchat has published its latest earnings results, posting a solid increase in active users and a significant jump in revenue, as the platform continues to refine its offerings and establish its industry niche.

First off, on users – Snapchat added 13 million more daily actives in Q2, rising to 293 million, which represents a 23% increase, year-over-year.

After a period of shaky usage results following the launch of Instagram Stories, which replicated one of the app’s core functionalities, Snapchat has since worked on its re-aligning its focus on helping friends maintain more direct connection, which has seen the app re-gain its growth momentum, and boost overall usage.

Snapchat’s seeing its most significant growth in India, represented in the ‘Rest of World’ chart above, where the app’s improved Android version has caught on, particularly in the wake of the TikTok ban in the region.

Snap has sought to capitalize on this by adding Indian-specific content, with 24 new Indian Discover Channels added in the quarter, while it’s also gaining traction in the market with its TikTok-replica ‘Spotlight‘, which, once again, has seen continued growth in usage. 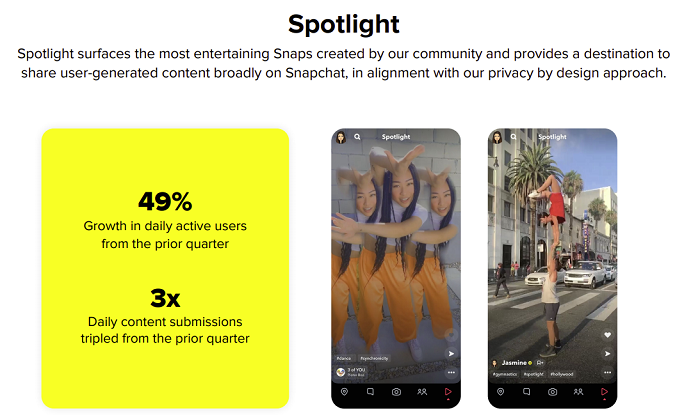 A key element of Spotlight’s growth has been Snapchat’s creator payouts for top content, which started at $1 million per day, but have since been revised down to ‘millions per month’ instead. Some Spotlight creators have reported frustrations with getting their Spotlight payments, but the additional lure of being paid purely for content had made Spotlight an attractive option, helping to boost Snap usage.

But that funding won’t be sustainable forever, with the added costs boosting Snapchat’s ‘Cost of Revenue’ significantly in the first half of the year. 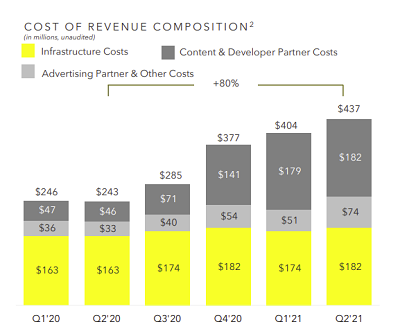 Given this, Snap’s hoping to eventually transition away from its Spotlight payouts, with the introduction of a new fan donation process through Snap Tokens, which could make Spotlight a more self-sustaining eco-system.

Will creators stick around without the lure of millions in ‘prize’ money for their creations? It seems that Snap’s going to soon find out.

On the revenue front, Snap posted a huge 116% YoY increase to $982 million for the period. 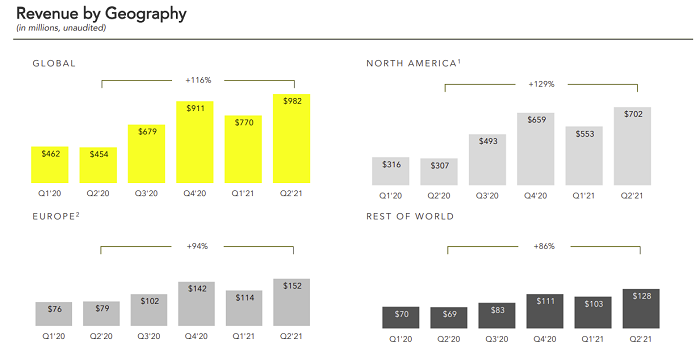 As you can see, that’s a big jump on Q1, and even the busier Q4 period. Shares in Snap rose 13.9% as a result, with the market buoyed by the unexpectedly big increase.

Of particular note were Snapchat’s average revenue per user (ARPU) stats, which showed that the company is making ground in all markets. 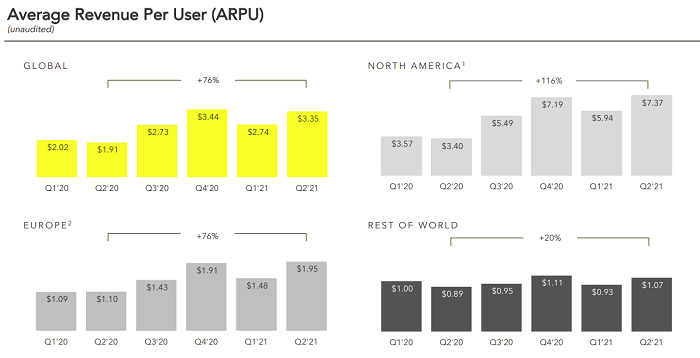 The biggest positive here is the chasing trend. Snap’s US ARPU is far higher, but it’s businesses offerings are far more established in the US, and the fact that European numbers are now rising is a good sign for its future prospects, with its ‘Rest of the World’ figures also likely to catch up, based on that trend.

Indeed, Snap has highlighted its expanded opportunities in a separate investor presentation, with this graphic showing its potential for expansion, based on these trends. 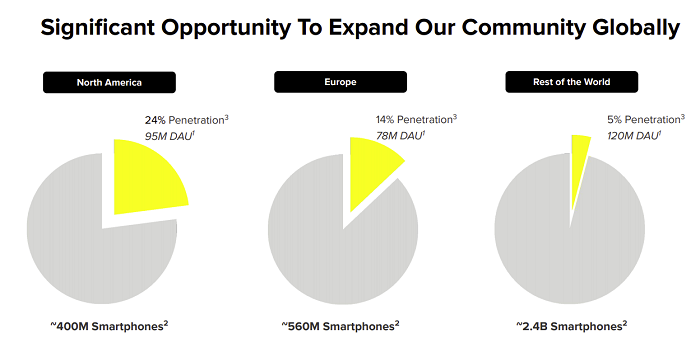 Over time, Snapchat has the potential to see significant expansion in these regions, with the platform only now looking to push its operations in many areas to the next level. As it further establishes its base, and expands its local impact, the potential is there for huge growth. 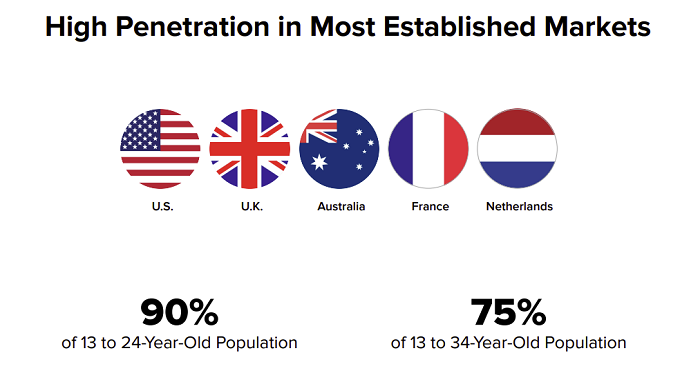 For marketers, that’s a key point – Snap’s reach and influence among younger audiences is massive, and it seems to be catching on with this segment in more and more regions.

Among other stats and notes, Snap also says that its Games element is seeing more usage, with 30 million users now playing games in the app every month.

Snap’s also looking to further expand its Discover programming, in line with user demand – and on this front, Snap really is leading the way in terms of next-generation video programming, that aligns with evolving consumption habits.

The short, episodic nature of Discover content seems to hold more appeal with younger viewers, who’ve grown up watching YouTube clips. And with that, Snap could be building the next generation of TV content, at least in terms of snackable, quick-hitter shows that can be consumed anywhere and at any time.

“We introduced several new categories for Scan, including fashion and food, which is already used by more than 170 million Snapchatters every month to identify dog breeds and plants, discover recipes, and shop for clothing.”

But that last point is where Snap’s really looking. The next phase of Snapchat will likely see it lean more into AR and digital clothing, with sponsored digital items available in the app, and new AR sizing tools to help convert those items into real-world purchases.

Snap is surprisingly well-advanced on the AR front, considering its far better resourced competition in the space. In fact, in many ways, its actually leading the charge, with its connection to younger users, and alignment with rising trends, potentially seeing it better placed to facilitate AR adoption than other, bigger providers.

Which will become a bigger consideration as its next-gen Spectacles come into play.

“I think AR is about having a conversation with the world around you.” @ZachLieberman‘s latest AR project for the new generation Spectacles, ‘Poem World,’ takes poetry off of a page and into your environment with the help of AR. pic.twitter.com/TiCJCqtVEB

AR is the next level for Snap, and while it’s seeing positive and improving response to its existing tools, and its evolving Discover programming, if it can harness that same enthusiasm and translate it into the next stage for AR, that could open up a range of major opportunities for the app.

It seems like it’s on the right track, with these results underlining its efforts.

How to Conduct a Social Media Audit [Infographic]

It’s the beginning of the new year, which makes it a perfect time to review and refresh your social media profiles, while also establishing clear, data-backed goals and targets based on current performance.

When was the last time you did a thorough review of your social profiles and insights?

To help steer you in the right direction, the team from Emplifi have put together this guide to conducting a social media audit, and defining the key measurable for your social media marketing approach.

And while you’re likely aware of the importance of these steps, it’s handy to have them all in a one-page summary, while there may also be some elements that you haven’t updated in a while that need to be reviewed.

Check out the full infographic listing below.

Is influencer marketing part of your digital marketing strategy for 2022?

With the rise of more creative, more native-aligned platforms and spaces, brands are increasingly relying on influencers to connect with new audiences, while the growing use of AR and other new technologies also necessitates a familiarity with platforms that takes time and knowledge to maximize.

Influencers can be a great avenue in streamlining such process, but you have to know your audience, and what kinds of influencers they’re tuning into, in order to get the most out of your influencer marketing efforts.

To provide some more context on this, the team from SocialPubli has put together this overview of five key influencer marketing trends of note for 2022. And while these notes won’t address all of the info you need, they could help you formulate a better outreach strategy, based on the latest trends and shifts within the creator space.

Check out the full infographic listing below.

www.entireweb.com
See also  Facebook Is Testing a Large 'F' Button in the Middle of Its Lower Function Bar
Continue Reading

Twitter has published a new range of industry reports, based on rising trends, in order to provide more context as to the key elements of focus among its userbase in each sector.

The new trend reports, which Twitter’s collectively calling its ‘Birdseye Report’, were compiled by Twitter data partners, including Hootsuite, Meltwater, Sprinklr and more. Each partner took on a specific element of expanded Twitter conversation, giving each discussion and industry dedicated focus, providing in-depth insight into the latest key shifts in the app.

You can download all the Birdseye Reports here, but in this post, we’ll look at some of the key highlights.

First off, the reports are based on a range of key tweet trends over the past year.

As you can see here, you can select the specific sector report you want to read, all of which are available via email sign-up – though you can select not to have Twitter or the providing company contact you as a result of your interest.

Each report covers the top trends in each sector, based on tweet discussion, which points to rising areas of opportunity and focus for your tweet marketing.

As you can see here, the reports include both broad trend results, like these, highlighting bigger shifts in each sector, as well as more specific tweet engagement shifts, relative to key focus elements.

Those insights could help to shape your marketing approach, while each report also includes a range of more in-depth pointers and data points to help guide your understanding of what the Twitter audiences is most interested in.

There are also demographic insights:

As well as summary points for each, helping to ensure marketers can make the most of each report:

There’s a heap of great insight here, and if you’re working in any of the highlighted sectors, and are looking to improve your Twitter approach, it’s definitely worth downloading the data and checking out the findings.

Even if you’re not looking to improve your Twitter strategy, it’s likely worth getting access to the insights and seeing what people are most interested in for each segment.

How to Conduct a Social Media Audit [Infographic]

“Tell Me About a Time You Made a Mistake”: Best Answers and Examples

Which Is Better for SEO?