You may not like it, it may seem strange and out of place. But it does seem like Twitter is pushing ahead with new emoji-style Reactions on individual tweets. 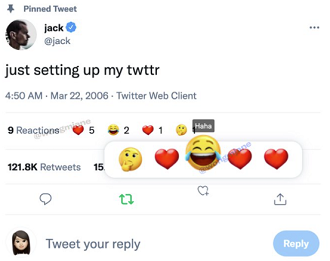 As you can see in this new example, posted by reverse engineering master Jane Manchun Wong, Twitter is currently working on a new process for choosing a reaction emoji on a tweet, with the total reactions to be displayed along the bottom line of the tweet detail.

Wong notes that this is currently an early mock-up, so it obviously won’t have three versions of the same emoji in the final product. But the Reaction picker itself looks very much like other quick response tools in other social and messaging apps.

Twitter has been tinkering with the expanded response options for the past few months, with TechCrunch reporting back in March that the platform had been surveying users about the potential of adding a broader set of emoji-style reactions on tweets, giving people more ways to quickly engage in the app.

The proposal has been met with mixed response from the Twittersphere, but really, the addition of Reactions on tweets does make a lot of sense, in terms of aligning with habitual behaviors, inherited from other apps, and boosting engagement and interaction with tweets.

By adding Reactions, Twitter can provide advertisers and businesses with more data on specific user responses, while it would also provide Twitter’s development team with more indicators to help fuel its algorithms, and show people more of what they like, and are more likely to respond to as a result.

And as noted, with such tools now commonplace in many other apps, people are pretty much used to quickly reacting – so why not provide the same on tweets, and glean that extra element?

Of course, the counter is that these are flat vanity metrics, which will give users yet another meaningless scoreboard to compete on, which lessens the social media experience by trivializing such contributions. In general, Likes and follower counts can contribute to this, as acknowledged by Twitter CEO Jack Dorsey himself, but Reactions at least provide some additional nuance, and a broader indicator of how others are responding to a comment or post.

I mean, if you’re going to have Likes, you may as well have Reactions – and while there is also a risk that response emojis can be used in negative ways, by limiting which options are included, Twitter can limit this.

Twitter itself hasn’t provided any official update on the project, but it does seem to be moving along. And going on Wong’s previous discoveries, it likely won’t be long till we get an official announcement.