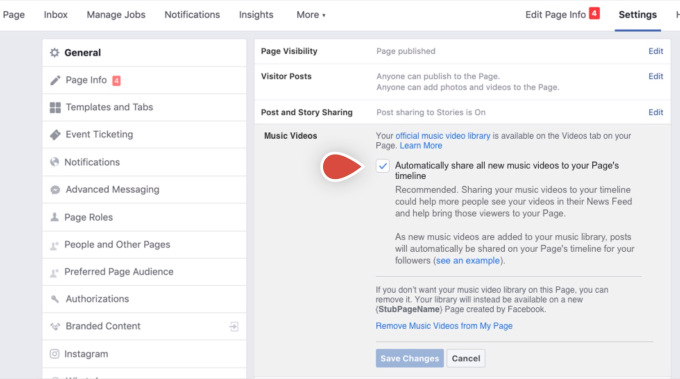 Facebook today confirmed it will begin rolling out official music videos across its platform in the U.S., as TechCrunch first reported, as well as introduce a new Music destination within Facebook Watch. The changes, which will go into effect starting this weekend, will allow Facebook users to discover, watch and share music videos from a wide range of artists, including, for example, Anitta, Blake Shelton, Bob Marley, Diplo, Elton John, Jonas Brothers, Josh Groban, Keith Urban, Maren Morris, Marvin Gaye, Miley Cyrus, Nicki Minaj, and others.

Though Facebook had already been working with partners in India and Thailand on a similar music experience before today, the U.S. launch is enabled by Facebook’s expanded partnerships with top labels, including Sony Music, Universal Music Group, Warner Music Group, Merlin, BMG, Kobalt and other independents.

Facebook tells TechCrunch its deals include the full catalog across all major partners and a host of independents.

TechCrunch earlier this month reported Facebook’s plans for music videos would arrive August 1st. We also noted that supported artists were being informed they would soon need to toggle on a new permission that would allow Facebook to automatically add their music videos to their Page, where they could be discovered by fans on the Page’s Videos tab. Once enabled, the artists will be able to edit or remove their video posts at any time.

However, if this setting was not enabled, Facebook will instead automatically generate a separate official music Page on the artist’s behalf, titled “[Artist Name] Official Music,” to enable discovery. That Page would be created and controlled by Facebook and accessible through Facebook Watch, though artists can later choose to opt-in to include their official videos on their own Page.

With the launch, Facebook users will be able to follow their favorite artists, then receive the latest music video releases from those artists in their News Feed, as they go live. The “follow” option will be available not only on the artist’s Facebook Page, as before, but also directly from the music videos themselves.

By clicking through on the shared posts, fans will be directed to the artist’s Facebook Page, where they can browse the Videos tab to watch more officially licensed music.

The music video posts, like any on Facebook, can be shared, reacted to and commented on. They can also be shared across News Feed, where friends can discover the posts, as well as shared to Groups and in Messenger.

The dedicated Music section on Facebook Watch, meanwhile, will allow users to explore music by genre, artist name or mood, or across themed playlists like “Hip Hop MVPs,” “Trailblazers of Pop,” “Epic Dance Videos” or more timely playlists like “Popular This Week” and “New This Week.”

The videos will also be monetized by advertising, like elsewhere on Facebook Watch. However, unlike some video ads, they won’t interrupt the music in the middle of playing. Instead, Facebook tells TechCrunch the ads will either appear pre-roll, during the video as an image ad below the video player or post-roll. These plans may change in the weeks ahead as it iterates on the experience, Facebook notes.

The company will apply its personalization technology to the music video experience, too, we understand. As users watch, engage and share, the Music destination in Facebook Watch will become more attuned to your personal likes and interests.

More social experiences are planned for the future, including user-generated playlists.

“Official music videos on Facebook are about more than just watching a video. They’re about social experiences, from discovering new artists with friends to connecting more deeply with artists and people you love,” said Facebook VP of Entertainment, Vijaye Raji. “There’s something in our music video catalog for everyone, and we’re excited for people to discover and rediscover their favorites,” he added.

Facebook says this weekend’s launch of the new Music experience is just the start, and it plans to roll out more music across the platform over time.

Facebook’s launch of music videos is seen as a significant challenge to YouTube, which accounted for 46% of the world’s music streaming outside of China as of 2017, according to a report from IFPI. YouTube, around that time, also claimed more than 1 billion music fans came to its site to connect with music from over 2 billion artists.

More recently, YouTube reported it had paid out more than $3 billion to the music industry in 2019. The music labels, however, have shown interest in an alternative to YouTube, which they feel doesn’t pay enough. The financial terms of Facebook’s deal with the labels were not disclosed.

Though Facebook had deals with music labels before now, those were more limited. Artists from major labels, for example, weren’t able to share full music videos due to licensing rights — they could only post a short preview. The change to include full videos could significantly impact how much time users spend on Facebook in the months ahead.

The launch follows a month-long Facebook advertiser boycott over issues around hate speech on the platform, which some brands have chosen to continue with, reports say. But the music video launch was not timed to encourage an advertiser return. According to documents previously reviewed by TechCrunch, the date of August 1, 2020 had been the planned launch date for some time.

The videos are now one of several ways artists can connect with fans on Facebook, as the company had already rolled out tools that allowed artists to promote new releases with custom AR effects and Music Stickers, host live-streamed Q&As on Facebook Live and raise money for important causes through the donate button in Live and Stories.

“Artist/Fan connection on Facebook is deeper and more authentic because of tools like Stories, Live and custom AR effects. Official music videos are re-born in that setting — they become part of the way people express identity and mood and bring a new dimension to the artist storytelling that happens on our apps every day,” said Tamara Hrivnak, VP of Music Business Development and Partnerships at Facebook.