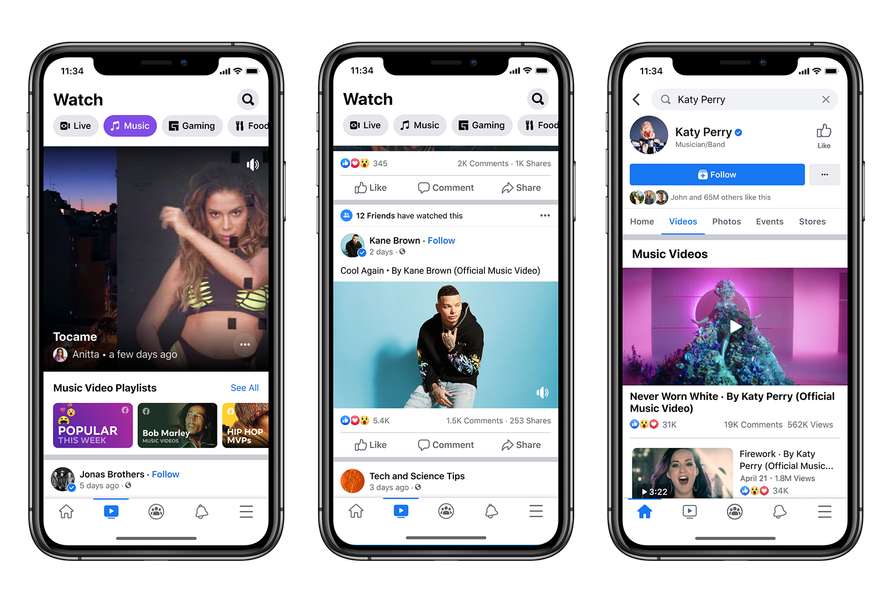 After announcing its new program for hosting exclusive music video clips earlier this month, Facebook has today unveiled it’s new ‘Music Video Playlists‘ within Facebook Watch, which will increase the focus on Facebook-exclusive releases, coordinated in partnership with music labels.

“Today, we’re adding a new way for people to come together around music by bringing official music videos to Facebook in the US. Starting this weekend, you’ll be able to discover, watch and share music videos from today’s top artists to up-and-coming bands and classics across various music genres on Facebook.”

The new process will essentially enable publishers to maintain control over the video clips of their artists when posted to Facebook, including associated monetization. That will then give Facebook more capacity to arrange deals for such, which could lead to more musicians making Facebook a bigger focus for their releases.

And already, Facebook has a range of exclusives planned:

“In the coming weeks, we’re excited for global music video premieres happening on Facebook, including exclusive music video content from J. Balvin, Karol G, Sebastian Yatra, Alejandro Fernandez and Calibre 50. Fans can also expect the premiere of the official music video for a new track from Lele Pons on Facebook first, who will be going live in advance to connect with fans and build excitement.”

The initiative may not seem like a major deal to general consumers, but for publishers, and Facebook, it could be massive.

Music videos make up a significant portion of YouTube viewership – seven of the top 10 most viewed YouTube videos of all time are music clips from popular artists, while YouTube even developed YouTube Music to tap into the popularity of music videos on its service. But while there are clearly big benefits for YouTube in hosting music clips, publishers have questioned whether’s they’re being fairly compensated for the usage of their artists’ content on the platform, given their significance to YouTube’s overall performance.

Many in music publishing have openly called for a better deal – and with this new, more centralized model, Facebook may able to offer them exactly that.

Facebook has larger audience reach, and it could, potentially, offer publishers a much bigger share of ad revenue generated by their content, in order to get more viewers across. More exclusives on Facebook equals more viewers for Facebook Watch – and if a lot of artists end up posting their clips to Facebook only, that could end up being a big deal.

Facebook says that it’s been working with partners in India and Thailand to “build the foundation of a music video experience on Facebook”, which it’s now expanding to the US through new partnerships with Sony Music Group, Universal Music Group, Warner Music Group, Merlin, BMG, Kobalt “and many others”.

“We’re also launching a new destination for Music in Facebook Watch where you can explore music videos by genre, artist or mood, as well as themed playlists like “Hip Hop MVPs,” “Trailblazers of Pop” and “Epic Dance Videos.” You’ll also find timely playlists like “Popular This Week” and “New This Week.””

Again, if Facebook can get more people coming over to check out exclusive music clips, it can use that attention to promote other Watch shows, and build its audience. It’s not the music clips themselves that Facebook is looking to monetize, its Watch more broadly, which will enable it to provide better deas to publishers for such moving forward,

It may not seem like a big shift, as you’ve always been able to watch music clips on Facebook. But exclusives could be important, and could provide a new boost for Watch usage.

It’ll be worth noting the view counts on these exclusives, and also, whether the same clips appear on YouTube after release.

See also  Twitter banning political ads is the right thing to do, so it will be attacked mercilessly

State of AI and Ethical Issues

How to Grow Your Customer Base

Google Ads Target CPA Not Going Away In 2022