A few weeks ago, Mark Cuban (who needs no introduction), went to Twitter to complain about how Google is ranking fake Shark Tank endorsements. Mark was not too happy with Facebook either about it. But Danny Sullivan from Google responded saying he will escalate the complaints.

Here are Marc Cuban’s tweets with the complaints:

Where are @google and @facebook , these news sites and @BankofAmerica and @@wellsfargo fraud detection units ? The @Ftc ? This shit has been going on for years. We report them, the platforms do nothing and people get ripped off ! https://t.co/nFF1wWbO0Y

Content filtering that we hear so much. If a platform can’t detect fake Keto or CBD gummy ads, can they really detect anything ? Or do they not care that mostly seniors are getting ripped off !

This went unanswered for a bit until Loren Baker tagged Danny Sullivan, Google’s Search Liaison on this:

Missed this; have passed along. Not a lot of actual content out there, makes it challenging. We do show some fact checks, which is good, but clearly we need to improve. Would help if maybe Shark Tank itself had a debunking page. I’d expect would rank well. cc: @mcuban …

Again, we’ll look to see how we can improve. But what I read, this was about web pages on newspaper sites talking about this, not ads on Google. If you have your own web page warning about it, that’s more helpful content where there’s limited content now that might help…

We rank web pages. If there’s a web page from Shark Tank saying this isn’t real, it’s likely to rank well above these things. That said, again, we’ll look into why the existing fact checks out there aren’t ranking even higher (one is high up on the first page of results).

That is where it ended.

I wonder how much of an impact this will have on Google adapting some of its algorithms around ranking these types of fake stories? Google can’t play Whac-A-Mole with each one of these, but they can develop algorithms to help reduce this from showing up in both organic and paid search. 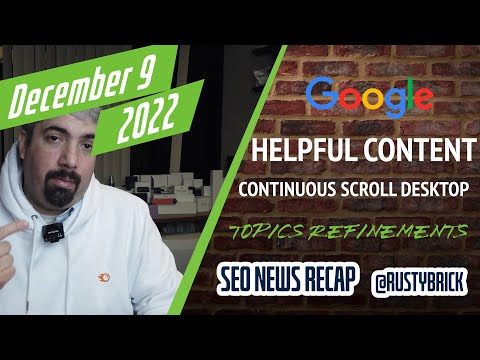 This week we had another confirmed update to the Google helpful content system; it is now global. Google also had a lot of volatility over the previous week, unrelated to this confirmed update. Google officially rolled out continuous scroll on desktop search this week. Google also officially launched topic refinements in the mobile search results but is also testing it on desktop. Google Search Console said the Subscribe with Google sites might see an increase in impressions and clicks in the search performance report. Google’s Gary Illyes recommended you load content before JavaScript if you get a Search Console notice. Google is testing removing the estimated number of search results. Google is testing showing short product reviews in the product thumbnail images. An SEO poll asks if link building is as effective or not. Google said SafeSearch could be triggered by a lot of explicit and extreme cursing. Google said set up tests to see if your site is blocking Googlebot. Google Business Profiles has a bug with uploading logos or images. Google updated the keyword planner to let you organize keywords into ad groups. Microsoft Advertising released a bunch of new features. I posted the monthly Google webmaster report this week. Finally, Google posted the top trending searches for 2022. And if you want to help sponsor those vlogs, go to patreon.com/barryschwartz. That was the search news this week at the Search Engine Roundtable.

SPONSOR: This week’s video recap is sponsored by Semrush.