Google sent a document to the U.S. Copyright Office that explains how Google’s DMCA update (aka the Pirate update) has been strengthened by (1) catching redirect schemes and (2) a site hit by this demotion on average sees a 89% drop in Google search traffic.

I spotted this via Glenn Gabe on Twitter via TorrentFreak.com. The PDF document was published on February 8, 2022 and Google wrote in that document:

“Demotion of Websites That Receive A Large Volume of Notices. We have developed a “demotion signal” for Google Search that causes sites for which we have received a large number of valid removal notices to appear much lower in search results. We have also made it much harder for infringing sites to evade demotion by redirecting people to a new domain. Finally, we have added a “still-in-theaters/prerelease” flag for DMCA notices involving this category of content to enhance the Search demotion signal. When a site is demoted, the traffic Google Search sends it drops, on average, by 89% on average.”

Clearly Google is saying that the algorithm is a “demotion” signal that can reduce the traffic Google sends to that site on average 89% – that is a huge number. Plus, Google looks to see if sites use redirects from the infringing domain to a new domain to catch those players.

Google launched the Google DMCA update back in 2012, a decade ago, then in October 2014 it updated it and we have not heard much about it since. So now here is an update from Google on this DMCA update.

Here is Glenn’s summary of this:

More: Google also added a “still-in-theatres/prerelease” flag for DMCA notices to enhance the Search demotion signal. Also, when a URL is delisted following a DMCA notice, any Google ads running on that page are auto disabled. We also will not run ads that link to delisted pages: pic.twitter.com/HBmEXCE3lQ 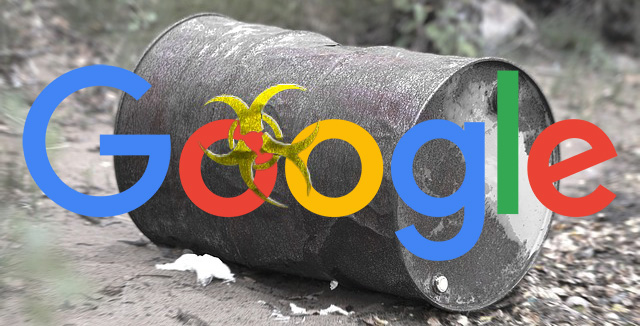 John said on Mastodon “if a site’s most important page (say homepage) is “terrible” (in the sense of any algorithm), that’s a pretty big deal. If the same site has a random archived page that’s “terrible,” no big deal.”

The question was from Robb Watts, and his question didn’t exactly ask this; it was more about the percentage of bad pages, but here is what he said:

I’d read that where a domain is id’d as having a degree of unhelpful content that it can pull down the performance of the domain as a whole. Is there any kind of scale here? Eg domain has x% poor content and y% great, then ability to rank impact == usual position – z ?

Nuance + character-limit = hard :). Here’s an example: if a site’s most important page (say homepage) is “terrible” (in the sense of any algorithm), that’s a pretty big deal. If the same site has a random archived page that’s “terrible”, no big deal.

There’s no absolute “page-percentage” number for this, I’d see it more as “what would the avg user think when they went through / saw your site”.

John later added again, “It’s really not a matter of number of pages or percentage of pages on a site, since those are such arbitrary metrics. It’s really more about the bigger picture for the site.”

So yea, if the best stuff on your site is really, really bad, then that is a non-starter.