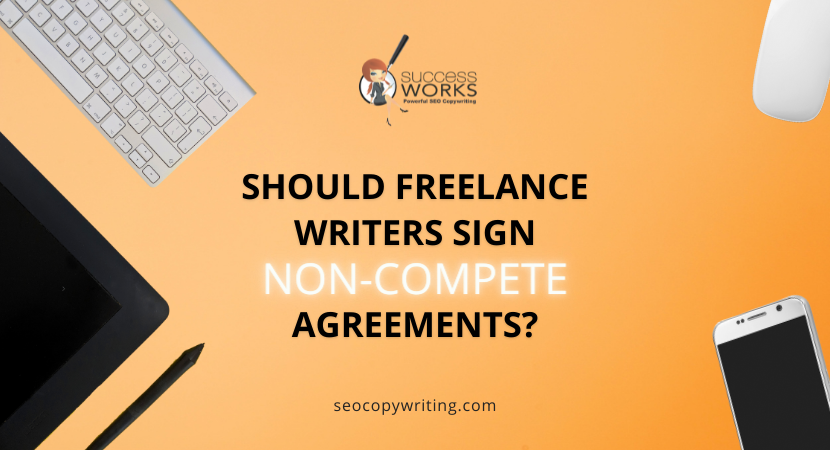 I lost a consulting job last week — and how it happened is a great lesson for freelancers and agency owners.

Some backstory: An agency owner wanted to partner on a possible client project. We had spoken before and “clicked” well, so I was happy to help with the proposal and provide my content thoughts.

Especially since they’d hire me to work on the project when the prospect signed on the bottom line.

The excellent news for the agency owner? They got the gig.

The bad news for me was the end client insisted I sign a non-compete to come on board. The contract restricted me from working with a list of companies (the end client’s “competition”) for three years.

That meant I couldn’t work with the companies AT ALL —  even if they directly contacted me. Even if the work I’d do for the competing companies was completely different.

My agency friend couldn’t hire me according to the end client’s contractual terms UNLESS I signed the non-compete.

Which I wouldn’t do.

And if you’re faced with a similar situation, you should consider walking away too.

I’m so glad you asked.

Sometimes, if you work with an agency, their contract states that you can’t solicit their clients. After all, the agency doesn’t want you contacting their clients, saying, “Hey, I’m already writing your content. Why not hire me directly and cut the agency out of it?”

That, to me, makes sense.

It may not feel like a big deal at the moment. After all, you just made a 5K sale!

Then, 18-months later, another B2B SaaS company wants you to consult with them. They’re ready to sign a $25,000 agreement…but you can’t take the gig.

Why? Because you signed away your rights 18 months ago.

(You see where this is going?)

Back in my twenties, I learned this lesson the hard way. I accepted a sales job and stupidly signed a non-compete. The job was dreadful, and I lasted all of two weeks.

I got a new job quickly — but I couldn’t start until the company president released me from the non-compete. I had to track him down and beg him to let me out of the contract.

It took weeks. Weeks with ZERO income because of that stupid contract.

You can’t restrict how someone makes a living.

Does that mean freelance writers or agencies should never sign non-competes?

Not necessarily. But, this IS a situation where you want to get an attorney involved before you sign. Always.

Why? Assuming you want to move forward with the client, your attorney ensures your right to make a living is protected. Non-competes are tricky, and if they’re too broad or the duration is too long, your income is at risk.

Plus, you may be so excited about landing the client that you don’t see the far-reaching ramifications. Your attorney can dispassionately explain the risks and trade-offs and craft an agreement that’s more in your favor.

For instance, if a company wanted to give you a humongous yearly retainer in exchange for not working with Company X, well, that may be worth it. You’d be getting something in exchange for signing a non-compete.

Or perhaps the client would agree to shorten the non-compete duration from three years to one. It’s not great, but it could be workable in some situations.

Just don’t sign away your right to do business without getting something in return. And, if you want to negotiate your non-compete, always get an attorney’s help.

Your livelihood is too valuable to sign away for one stupid client.

Have you been asked to sign a non-compete? How did you handle it? Leave a comment and tell me all about it!

When To Use Rel Canonical Or Noindex …Or Both 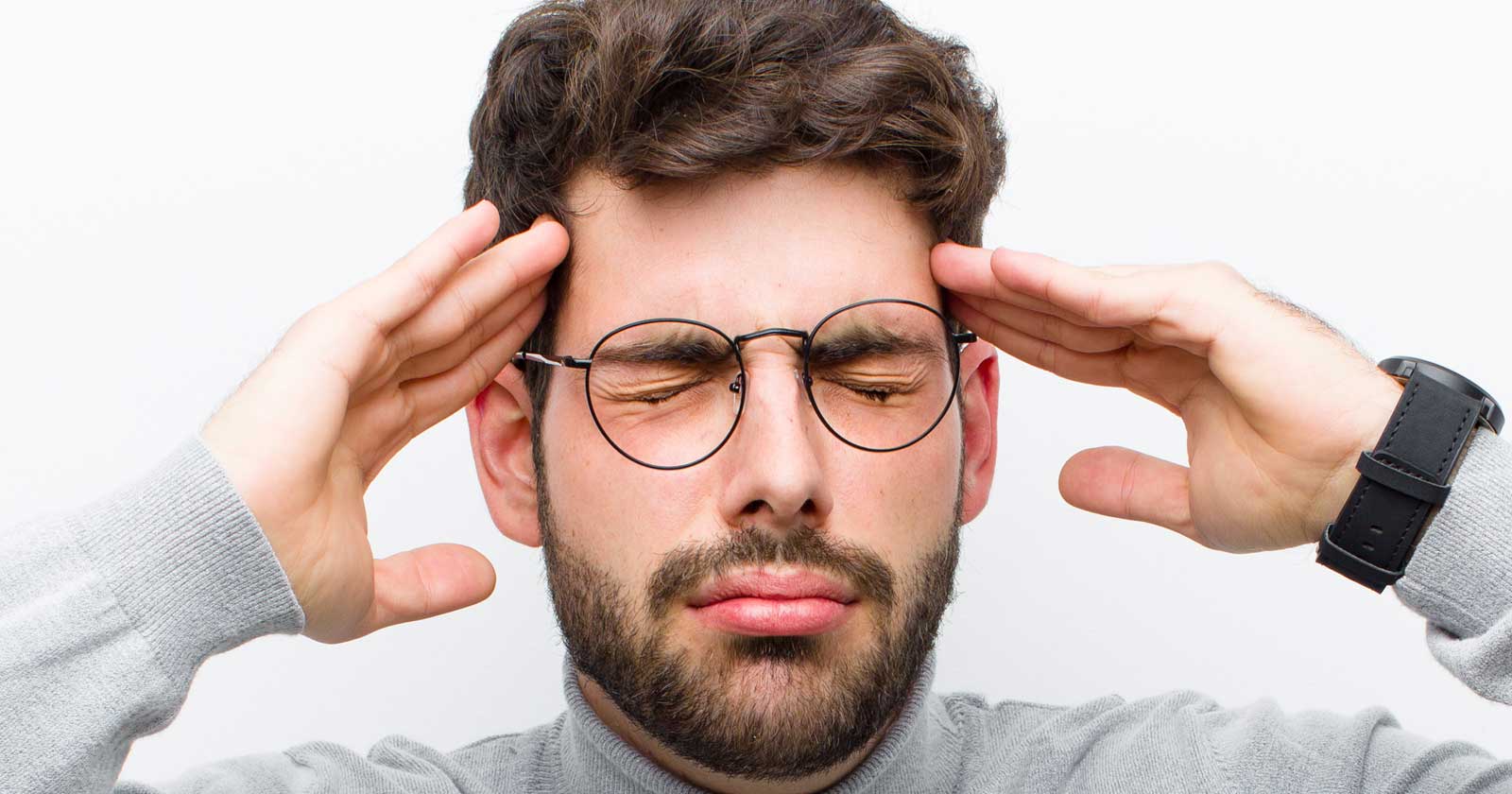 Publishers who updated to Yoast SEO 19.5 may have experienced more than they expected. Reports of fatal errors caused by the update soon began surfacing. Interestingly, the error appears confined to specific situations and not across the board.

A standout improvement is the Front-end SEO inspector that provides an overview of posts and various SEO settings like meta tags and structured data.

Unfortunately, a bug also occurred in a specific situation that caused a fatal error.

A fatal error can occur when there is a conflict between two plugins.

….And this is why I wanted to switch my site to @Wix. There goes my afternoon as I have to figure out why THIS happened pic.twitter.com/p98MlfGSMj

Turns out an update from @yoast broke it 😢

It’s not uncommon for a random conflict between plugins to cause a problem. But this wasn’t all that random, as others confirmed that the same thing was happening to them.

“I woke up today and tried to access the dashboard of my website and I was met with a Fatal Error, I’m not able to access it through backend nor Login.
How can I solve this issue.”

Two others responded with the same problem, with one of them offering this comment:

“Same here. Can’t login in backend and both site and backend throw a fatal error.

Saw that Yoast has autoupdated today.

Moved both the free and the premium version from plugins directory to a temporary directory and now the site is back online.”

Someone else with the same setup of the free and premium version echoed that report, posting:

“Getting a fatal error after the update too. Also have the free version, premium version and News SEO.”

The official Yoast support person was apologetic, responding with this statement:

“We’re sorry that you’re experiencing a fatal error. Thanks for reporting.

We’re investigating and it seems to be a problem with the latest update of Yoast SEO while the newest Premium wasn’t released yet. This shouldn’t have happened.

We’re looking at getting this resolved as soon as we can by releasing a patch for free and also by releasing Yoast SEO Premium asap.

Either should fix the fatal error.

“A patch was created quickly by the team indeed and for most sites that resolved it entirely.

For some sites the auto update mechanism failed to run properly and therefore those sites didn’t automatically fix themselves.

We’ve been discussing this internally a lot, as we weren’t happy that this happened at all, and we weren’t happy with how we handled it. We’re all honestly really bummed by it and feel sorry for the sites we’ve broken.”

The last commenter who noted how they had two versions of the Yoast plugin installed, the free and the premium versions, may have been a clue to what caused the fatal flaw because that situation was cited as the reason why the Fatal Error was happening.

Yoast responded quickly to the issues and issued a patch the very same day, version 19.5.1.

According to the Yoast SEO WordPress Plugin changelog that documents what is in each update:

Fixes a bug where a fatal error would be thrown on the front-end when Yoast SEO 19.5 was used with an older version of Yoast SEO Premium.”

The Problem is Fixed with Version 19.5.1

One user posted this comment in the Yoast support forum:

However, because there are millions of users with millions of combinations of other plugins installed, it’s almost inevitable that very few edge cases may pop up with issues.

For example, in a post in the official Yoast support forum, one user describes updating from 19.4 directly to 19.5.1 and not having a satisfactory experience.

Glad I never trust autoupdate, Not a fan of paying anyone to be a beta tester.

Yet this one still got me.”

It’s not unusual for edge cases to surface for any update, and this might be the case for Yoast 19.5.1.

The cause of the problem appears to be that Yoast published an update for the free version of Yoast (19.5) but did not simultaneously publish an update to the premium version, which then caused the two plugins to conflict, resulting in a fatal error.

Dive into a Floating Platformer – Ynglet is out Now on Xbox