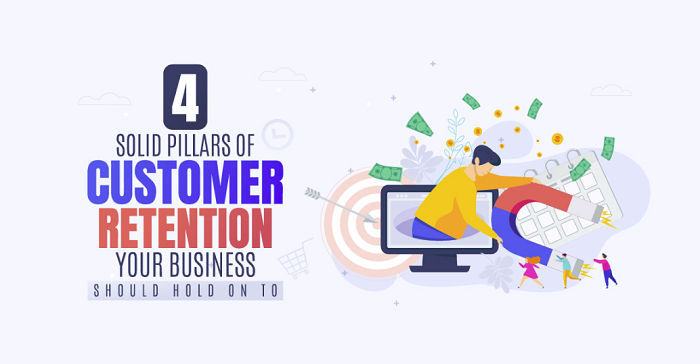 Acquiring new customers gets more focus in marketing circles, but keeping those that have already made a purchase is just as – if not more important, and in order to do that, you need to have a retention strategy, which not only looks to maintain connection and engagement, but also meets each audience’s evolving needs with your outreach.

As highlighted in this infographic from Branex, loyal customers are extremely valuable, and are more likely to buy from you again. But if you want to reach that next level of branding, it does require a more comprehensive focus.

The graphic provides some key notes on how to build a retention strategy, by utilizing the data that you have available to build a more responsive approach, based on variable stages in the customer journey.

It’s worth digging a little deeper into your insights, and using your data to segment your customers into different categories, to maximize response based on their needs.

Check out the full infographic below.

Social media does turn out to be good for something, after all. Much raging online about Trump’s Mar-A-Lago raid isn’t going over. Maybe the endless tantrums are getting a bit stale. A virtual tide of Twitter responses isn’t buying it on any level.

One Tweet pointed out Trump said “they raided my home” before it was actually raided. Trump lawyers, meanwhile, said he wasn’t notified…? Generally speaking,  warrants are not carried out on an RSVP basis. You don’t ask the crack house when would be a good time to call, for example.

You may (or may not) also be interested to know that “Trump civil war” is now an auto search cue. The headlines for that search on Google News are really something else. The unimpressed response isn’t getting any coverage, hence this article. The picture is very different.

The adult news sticks to the point – Violation of the Espionage Act, Presidential Records Act; you know, law. Much of this media, understandably, focuses on “what next?”.

“Other” news is all about QAnon-like conspiracies. (If you’ve got no facts, fiction is your only real option.) Trump’s playing along with it as usual. Trump is seen doing a Mussolini salute, an actual Fascist fist, in various styles on multiple occasions. It looks more like a trained move. He wasn’t doing that previously, and he’s not good at it. Presumably, it means “defiance”, but it looks awkward and rehearsed.

Of course, the image has a role in anything to do with Trump. Trump is pumping the pity buttons in public. The GOP and MAGA are pushing the extreme rhetoric. As a marketing exercise, it’s selling sand to people living in deserts. The problem is that it doesn’t sell to anyone else.

These thunderous noises also don’t quite gel with the fact that Trump lawyers, who requested documents regarding the warrant, haven’t yet agreed to make them public. As mixed messages go, it’s about what you’d expect from anything associated with Trump. Is there a problem with making them public? Could be.

There’s a bit of a practical issue with “Trump civil war”, too. Any such thing would be total coast-to-coast carnage. Sandy Hooks and Uvaldes all round, no doubt. Does America, already so happily living among the gangs and mass shootings, really want a civil war?

You’ll need to answer that question. …Because over half the country didn’t vote for that and they might get really ticked off about it.

Disclaimer
The opinions expressed in this Op-Ed are those of the author. They do not purport to reflect the opinions or views of the Digital Journal or its members.

When To Canonicalize, Noindex, Or Do Nothing With Similar Content

How Video Consumption is Changing in 2022 [New Research]

How To Beat Your Competition Using Only SERPs

11 Tips to Improve and Refine Your SEO Strategy [Infographic]