Meta has announced a new expansion of its efforts to stop the potential radicalization of people via its apps, with its ‘Redirect Initiative’ being extended to two more regions.

“We’re [expanding] one of our flagship counterspeech initiatives, The Redirect Initiative, into Pakistan and the UK. Now when someone in Pakistan or the UK searches on Facebook using words associated with organized hate or violent extremism, the top search result will be a link to resources and support for how to leave violence and extremism behind.”

Which sounds pretty simple – a little too simple to have any real impact. Right?

Well, not entirely. According to Meta, the Redirect Initiative, which is already active in Australia, the US, Germany and Indonesia, has proven successful in disrupting the connection between users and violent, extreme content.

Though not massively so. Meta’s contention here is based on this report, which shows that of 57,523 searches for such content in the app, over a three-month period between November 2019 and March 2020, 2,288 users clicked on its alternate, credible sources, which then lead to 25 of them seeking support from program partners.

That’s not a great success rate, but I guess, in Meta’s view, as well as those working with the company on the initiative, any disruption in this chain is significant, while the 2k clicks on these alternate links also show at least some hesitancy in searchers, which could have extended deterring impacts.

And it might also be just the start, with Meta further noting that academic insight has shown that countering such actions with credible alternatives is the best way to combat radicalization, and essentially stop users tumbling down dangerous online rabbit holes.

It’s an interesting initiative. Not an overly successful one right now, but as noted, there will be lessons learned, and progress made, which could see it become a more significant, influential factor in reducing the pathways to more extreme responses over time.

Meta’s also working to improve its detection measures, which involves working with partner organizations and platforms to identify key trends, and in combination, all of these elements may end up having a more significant impact.

We now know, or at least have a fair understanding, of the role that social platforms can play in this chain, and if Meta can work with experts to develop better processes, then it is worth experimenting with such, even if the initial numbers aren’t wholly convincing.

Just one user deterred may well be enough, while every person who goes on to seek help can also provide further insight into exactly how this process evolves, from a psychological standpoint, which could glean key breakthroughs for expanded initiatives. 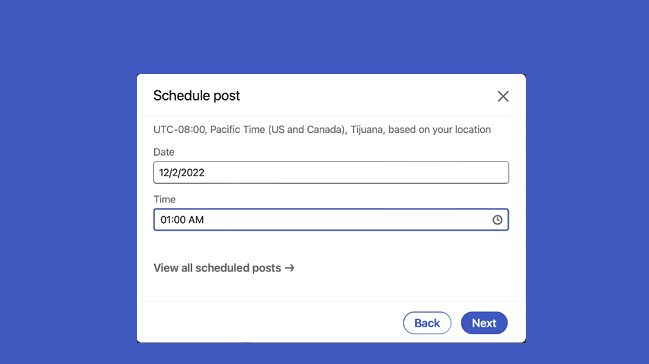 That’s right, some users are now able to access LinkedIn’s native post scheduling tool, which it’s been testing internally over the past few months.

That adds another tool to your LinkedIn management process, which could be a big help in maximizing your on-platform presence. And with more users looking to potential alternatives, just in case Twitter falls in on itself, that may be a bigger consideration.

The process is pretty straightforward – you tap on the clock icon to access the scheduling options, then enter a date and time for when you want your post to go live in the app (up to 90 days in advance).

You then tap ‘Next’ and ‘Schedule’ and that’s it, the post is all ready to go, all within the LinkedIn app.

As you can see in the second image, you can also view and manage your scheduled posts in the app, providing a simple way to maintain your LinkedIn presence on the go.

I mean, functionally, it’s not a game-changer, as you can already schedule LinkedIn posts in most third-party social media management apps. But native scheduling options tend to be a little more reliable, particularly in regards to displaying how your posts will actually appear once they go live. Most scheduling tools do now include preview elements to help on this front, but integrated tools provide more definitive guidance, while also facilitating more post types and tools.

We asked LinkedIn for more info on the roll-out and it provided this statement:

“We’re starting to roll out post scheduling on desktop and Android so that our creators can easily plan the content they want to share next, with iOS coming soon. This means you can schedule text posts, videos, and images up to three months in advance.”

So not available to everyone just yet, but support for all platforms is coming soon.

LinkedIn also says that it’ll be adding post scheduling for Groups, Company Pages, and other types of content in the near future.

It could be a handy addition, helping you map out your LinkedIn strategy in a more integrated, mobile-friendly way.