The global COVID-19 health pandemic has raised the stakes for businesses when it comes to using digital channels to connect with customers, and today WhatsApp unveiled its latest tools to help businesses use its platform to do just that.

The Facebook-owned messaging behemoth is expanding the reach and use of QR codes to let customers easily connect with businesses on the platform, providing them also with a series of stickers (pictured below) to kick off “we’re open for business” campaigns; and it’s made it possible for businesses to start sharing WhatsApp-based catalogs — dynamic lists of items that can in turn be ordered by users — as links outside of the WhatsApp platform itself. 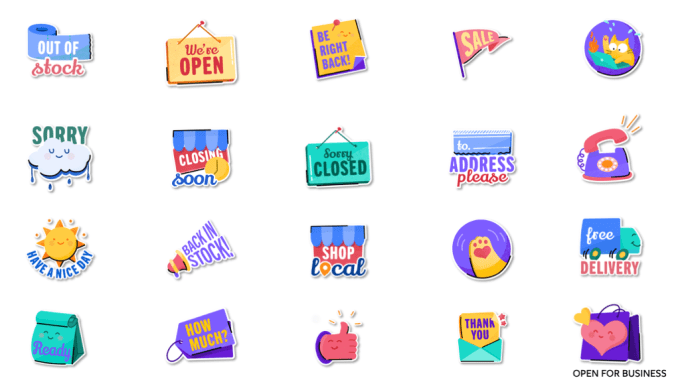 WhatsApps’ profile as a formal platform for doing business is growing, albeit slowly. The WhatsApp Business app — used by merchants to interface with customers over WhatsApp and use the platform to market themselves — now has 50 million monthly active users, according to Facebook. Its two biggest markets for the service are India at over 15 million MAUs and Brazil at over 5 million MAUs, while catalogs specifically have had 40 million viewers.

On the other hand, WhatsApp has hit some stumbling blocks with features it’s tried to put into place to grow those numbers faster and boost usage among businesses.

Specifically, last month WhatsApp launched payments in Brazil, its first market, aimed not just at users sending each other money but merchants selling goods and services over the platform. But just nine days later, Brazilian regulators blocked the service over competition concerns, and it has yet to be restored pending further review. (India, which many had thought would be the first market for payments, is now part of a bigger global roadmap for rolling out payments.)

To put WhatsApp Business app’s usage numbers into some context, WhatsApp itself passed 2 billion users in February of this year. In that regard, hitting 50 million MAUs of the WhatsApp business app in the two years since it’s launched doesn’t sound like a whole lot (and in particular considering that it has competitors like Google offering payment services to merchants). Still, there has always been a lot of informal usage of the app, especially by smaller merchants, and that speaks to monetising potential if they can be lured into more of WhatsApps’ — and Facebook’s — products.

All the more reason that Facebook is expanding other features to make WhatsApp more useful for businesses, and especially smaller businesses — capitalising on a moment when many of them are turning to numerous digital channels (some for the first time ever) like social media, messaging services, websites and third-party delivery platforms to get their products and services out to the masses, in a period when visiting physical storefronts has been severely curtailed because of the health pandemic.

QR codes got a little boost last week from WhatsApp on the consumer side, with the company introducing a way for contacts to swap details for the first time by sharing codes rather than manually entering phone numbers — not unlike Snap Codes and shortcuts for adding contacts created on other social apps. That is now getting the business treatment.

Now, if you need to reach a business for customer support, to ask a question or order something, instead of manually entering a business phone number, you can scan a QR code from a receipt, a business display at the storefront, a product, or even posted on the web, in order to connect with the company. Businesses that are using these can also set up welcome messages to start conversations once they’ve been added by a user. (They will have to use the WhatsApp Business app or the WhatsApp Business API to do this, of course.)

The catalog sharing feature, meanwhile, is an expansion on a feature that the company first launched in November 2019, which will now allow businesses to create and share links to their catalogs to post elsewhere. To be frank, the lack of ability to share catalogs at launch felt like a feature omission, considering that businesses often use multiple channels to market themselves, although it might have been an intentional move: there has long been questions about how tight links are between Facebook and WhatsApp, so slowly introducing features that share and cross-market from the start might be the preferred route for the company.

The idea now will be the those links can now be shared on Facebook, Instagram and other places.

Although all of these services, and WhatsApp Business remain free to use, they continue to lay the groundwork for how Facebook might monetise the features in the future, not least through payments but also through stronger pushes to advertise on Facebook, now with more ways of linking a company’s WhatsApp profile to those ads.