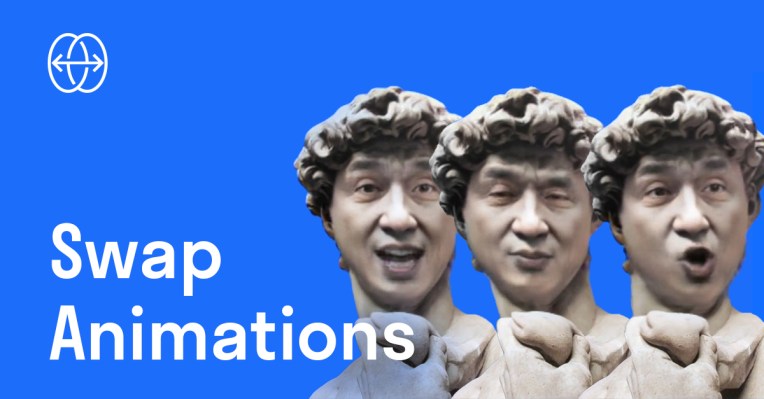 Buzzy face-swapping video app Reface is expanding its reality-shifting potential beyond selfies by letting users upload more of their own content for its AI to bring to life.

Users of its iOS and Android apps still can’t upload their own user generated video but the latest feature — which it calls Swap Animation — lets them upload images of humanoid stuff (monuments, memes, fine art portraits, or — indeed — photos of other people) which they want animated, choosing from a selection of in-app song snippets and poems for the AI-incarnate version to appear to speak/sing etc.

Reface’s freemium app has, thus far, taken a tightly curated approach to the content users can animate, only letting you face swap a selfie into a pre-set selection of movie and music video snippets (plus memes, GIFs, red carpet celeb shots, salon hair-dos and more).

But the new feature — which similarly relies on GAN (generative adversarial network) algorithms to work its reality-bending effects — expands the expressive potential of the app by letting users supply their own source material to face swap/animate.

Some rival apps do already offer this kind of functionality — so there’s an element of Reface catching up to apps like Avatarify, Wombo and Deep Nostalgia.

But it’s also going further as users can also swap their own face into their chosen source content. So you could, for example, get to see yourself as a singing Venus de Milo, or watch your visage recite a poem from the middle of a pop-art painting like Andy Warhol’s Marilyn.

The Andreessen Horowitz-backed startup is still being cautious as it expands what users can do with its high tech face-shifting tool — saying it will be manually moderating all uploads from the new feature.

Rivals in the deepfake space are arguably pushing its hand to open up functionality faster, though, with apps like Avatarify already letting users animate their own snaps. And — notably — a Reface spokeswoman told us it’s planning to make user generated video uploads available “in the near future”.

Pro users are getting a little taster — as they can upload their own GIFs to face swap into with this latest feature release too.

“We’re really excited to see what Reface users do with swap-reenactment, which is a major technical milestone in terms of the machine learning technology inside of the app,” said CEO Dima Shvets in a statement. “Reface content creators have been clamoring for more tools for personalized content and self-expression – and this feature delivers, dramatically extending the opportunities for realizing their vision and creativity.”

The still young app has proved popular over its short run, garnering viral buzz via social media shares as users were keen to show off their funny face swaps.