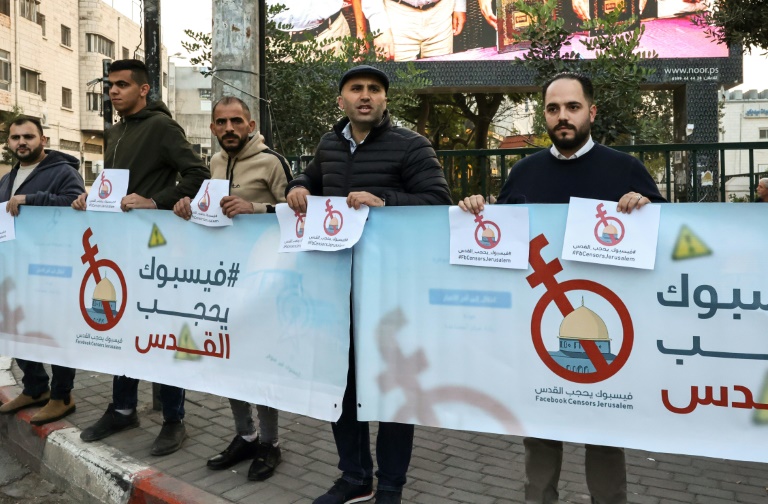 Palestinian journalists have raised the alarm over what they describe as unjust suppression of their content on Facebook, a claim backed by rights groups but rejected by the social media giant.

On December 4, Palestine TV correspondent Christine Rinawi posted a video on her Facebook account in which Israeli security forces were seen shooting a Palestinian on the ground, killing him. He had just carried out a knife attack on an Israeli civilian.

Shortly after she posted her video, Rinawi, who has nearly 400,000 followers, noticed it had been removed from her account.

According to monitoring centre Sada Social, 600 Palestinian accounts or pro-Palestinian Facebook posts were restricted or deleted in 2021. — © AFP

This was not her first experience with Facebook’s enforcement, and Rinawi said her account had already been restricted after she shared footage of a November attack in Jerusalem.

In both cases, Facebook said it intervened because the posts violated the platform’s standards.

A spokesperson for Facebook’s parent company Meta said its policies “were designed to give everyone a voice while keeping them safe on our apps”.

“We apply these policies to everyone equally, regardless of who is posting.”

Allegations of pro-Israeli bias at Facebook have simmered for years and were renewed in October when Human Rights Watch, a vocal Israel critic, said the platform had “suppressed content posted by Palestinians and their supporters speaking out about human rights issues in Israel and Palestine”.

Palestinian reporters have cited multiple incidents they describe as censorship.

One popular online news outlet, Maydan Quds News, may even have to fire reporters after its main Facebook page with 1.2 million followers was deleted, a source who requested anonymity told AFP.

The Meta spokesperson told AFP it has “a dedicated team, which includes Arabic and Hebrew speakers, who are focused on keeping our community safe by making sure we’re removing harmful content”.

Palestinian activists and journalists protest against what they consider censorship of Palestinian content by Facebook. — © AFP HAZEM BADER

t also strives to address “any enforcement errors as quickly as possible so people can keep sharing what matters to them”.

In the midst of a bout of fighting in May between Israel and armed factions in the Gaza Strip — the worst in years — Facebook had acknowledged widescale deletion of Palestinian posts, ascribing it to a technical bug that it sought to fix.

Rama Youssef, a Jerusalem-based journalist who volunteered for the campaign, said Facebook hews to an Israeli point of view and has “double standards”.

The Arab Center Washington DC think-tank said the Israeli government also pushes to censor “tens of thousands of posts and accounts” that support a Palestinian point of view.

Meta did not answer AFP questions about requests from the Israeli government.

But the company denied accusations of bias, saying its community standards prohibit violence, terrorism, hate and large-scale criminal activity, as well as posts supporting those subjects.

In February, then-diaspora affairs minister Omer Yankelevich presented Facebook, Google, TikTok and Twitter with proposals to beef up the fight against anti-Semitism, saying it was “running rampant” online.

He said the site appeared to target the word “shahid”, Arabic for martyr, which Palestinians frequently use to describe people killed by Israeli forces, including those who carried out attacks.

Rifai told AFP that Facebook insisted it is bound by American standards which consider “attackers to be terrorists”, not martyrs to a political cause.

But he said censoring the term wholesale ignored the wider context of the Israeli-Palestinian conflict.

Meta did not respond to a question about its policies regarding the use of the word “shahid”.

But it said it reviews posts according to its own policies, as well as “local laws and international human rights standards”.

Rifai said he was concerned that deleting accounts might discourage Palestinians from “engaging with pivotal issues” for fear of losing “their digital history and presence”.

He said he obtained from Facebook “promises to improve the working mechanisms of the algorithms so as to differentiate between journalistic content and ordinary content”, but he feared they offered “temporary rather than radical solutions”.

Elon Musk has revealed more details of the coming revamp of Twitter’s $8 verification program, which was initially launched three weeks back, but then pulled from live production due to a raft of impersonations which caused significant confusion in the app.

Those impersonations also led to stock price dips, corporate apologies, misreporting – the $8 verification plan, while only available to some users, for a short amount of time, immediately caused significant issues for Twitter and it’s as partners.

So Elon and Co. took it back, in order to revise and re-shape the program in a more brand-safe, user-friendly way.

And now, Musk has revealed more details as to exactly how the updated $8 verification plan will work.

First, to limit the potential of misrepresentation of corporate and government accounts, Musk says that those profiles will now get a different colored checkmark, which will ensure that people can’t just buy a blue tick and then pretend to be Coca-Cola for example.

“Gold check for companies, gray check for government, blue for individuals (celebrity or not)”

App researcher Alessandro Paluzzi posted these examples of how these new ticks might look in the app.

The updated gold checkmark will ideally limit the potential for future users to do the same, because they won’t be able to buy the official gold tick – though there will be a period of adjustment and education on such for users.

Of course, the new variations of checkmarks do also add the potential problem of another elusive marker that people will be trying to get. But we’ll cross that extra complication when we come to it.

Another concern with this approach is that it’ll require manual checking, as Twitter can’t know for sure that it’s a brand or government account without some kind of confirmation.
Initially, Twitter has thus far opted to avoid any kind of manual confirmation in this new process, due to the additional labor requirement, but now, Musk says that this will be integrated into the updated process:

“All verified accounts will be manually authenticated before check activates. Painful, but necessary.”

How Musk and Co. do that with any level of efficiency, with 65% less staff, I don’t know, but it seems like they’re going to at least try to find a way to check each $8 subscriber before approving their blue tick.

Musk also noted last week that any change in user name will result in a blue tick being deactivated till Twitter approves the new name.

So, like, a lot of manual monitoring, with a lot less staff.

Also, for the traditional blue checkmarks, there’ll be no differentiation between those who’ve been given the marker, and those who’ve paid for it:

“All verified individual humans will have same blue check, as boundary of what constitutes ‘notable’ is otherwise too subjective.”

Which is true – there are a lot of blue checkmarks on random accounts, and it has been a confused system. But at the same time, there are also a lot of high-profile individuals who could be at risk of impersonation under this system – which, incidentally, is why the blue ticks were introduced in the first place (in 2009, an MLB star sued Twitter for allowing a scammer to use his likeness to dupe people in the app).

“Individuals can have secondary tiny logo showing they belong to an org if verified as such by that org.”

So an additional qualifier for spokespeople, CEOs and journalists, as another measure to avoid impersonation.

The updated elements will certainly lessen the scope for scam activity, but still, they do also introduce a level of risk, and at the same time, the scheme itself is unlikely to work out as Musk hopes.

The revamp of Twitter’s verification program is Elon’s first grand plan to save the app (aside from cutting costs), by giving users access to one of the most in-demand in-app features – the elusive blue checkmark.

Charging for verification could theoretically kill two birds with one stone, in verifying real humans (while making it cost-prohibitive to crate bot accounts) while also providing a direct revenue stream, thereby reducing the company’s reliance in ads. People want the blue tick, now they can get it, while Musk has also sought to amplify the cultural divide element, by presenting this as a way to even the field, and enable all users to get what only celebrities have thus far been able to access.

Initially, Musk was set to charge $20 per month for this service, but after an argument with the author of ‘Misery’, he reduced this to $8 per month.

In Musk’s view, this is a good deal, because who doesn’t have an extra $8 to spend?

He’s since sought to establish this as the norm, repeatedly telling his critics to ‘now pay $8’, as if it’s a forgone conclusion that people will indeed pay.

But they won’t, and history shows that there’s almost no chance that Musk’s paid verification scheme will actually work as intended.

Take, for example, Twitter Blue, which provides Twitter users with a raft of additional features, which was initially available for $3 per month.

Twitter Blue never saw much take-up, peaking at 100k subscribers, with even the addition of tweet editing, the most requested feature in social media history, failing to shift the needle in any significant way.

Given this, it’s difficult to see Musk’s new, $8 verification getting the number of sign ups he’d need to achieve his aims for the option.

Essentially, there’s no precedent to suggest that enough users will sign up to Elon’s $8 per month checkmark plan to make it worthwhile for the company to run, as either a revenue or verification pathway. Just 0.41% of Snapchat users pay for Snapchat+, a fraction of LinkedIn users pony up for Premium, while Meta concluded long ago that charging users was no where near as lucrative as serving a bigger audience more ads.

These new measures do counter some of the issues that the initial version of Musk’s $8 verification program introduced, but then again, they could also avoid them entirely by revising the current blue check system, as opposed to simply letting people pay for the marker.

But regardless, Musk is determined to push ahead, and find out for himself either way

Musk says the updated $8 verification plan will launch on Friday next week (12/2).