People are getting frustrated that Stories are everywhere now, but Google Maps is keeping it old school. Instead of adding tiny circles to the top of the app’s screen, Google Maps is introducing its own news feed. Technically, Google calls its new feature the “Community Feed,” as it includes posts from a local area. However, it’s organized as any other news feed would be — a vertically scrollable feed with posts you can “Like” by tapping on a little thumbs-up icon.

The feed, which is found with the Explore tab of the Google Maps app, is designed to make it easier to find the most recent news, updates and recommendations from trusted local sources. This includes posts business owners create using Google My Business to alert customers to new deals, menu updates and other offers. At launch, Google says the focus will be on highlighting posts from food and drink businesses.

For years, businesses have been able to make these sorts of posts using Google’s tools. But previously, users would have to specifically tap to follow the business’s profile in order to receive their updates.

Now, these same sort of posts will be surfaced to even those Google Maps users who didn’t take the additional step of following a particular business. This increased exposure has impacted the posts’ views, Google says. In early tests of Community Feed ahead of its public launch, Google found that businesses’ posts saw more than double the number of views than before the feed existed.

In addition to posts from businesses, the new Community Feed will feature content posted by Google users you follow as well as recent reviews from Google’s Local Guides — the volunteer program where users share their knowledge about local places in order to earn perks, such as profile badges, early access to Google features and more. Select publishers will participate in the Community Feed, too, including The Infatuation and other news sources from Google News, when relevant.

Much of the information found in the Community Feed was available elsewhere in Google Maps before today’s launch.

For example, the Google Maps’ Updates tab offered a similar feed that included businesses’ posts along with news, recommendations, stories and other features designed to encourage discovery. Meanwhile, the Explore tab grouped businesses into thematic groupings (e.g. outdoor dining venues, cocktail bars, etc.) at the top of the screen, then allowed users to browse other lists and view area photos.

With the update, those groups of businesses by category will still sit at the top of the screen, but the rest of the tab is dedicated to the scrollable feed. This gives the tab a more distinct feel than it had before. It could even position Google to venture into video posts in the future, given the current popularity of TikTok-style  short-form video feeds that have now been cloned by Instagram and Snapchat. 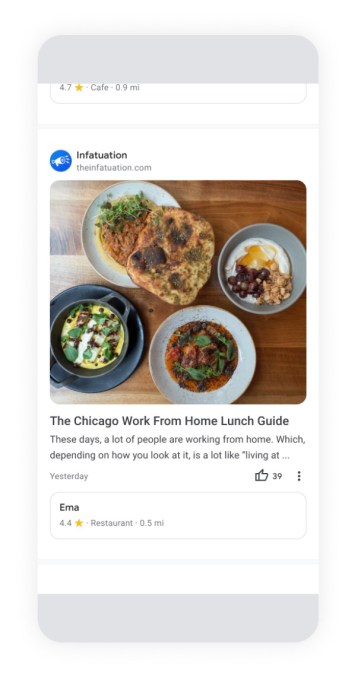 Today, it’s a more standard feed, however. As you scroll down, you can tap “Like” on those posts you find interesting to help better inform your future recommendations. You also can tap “Follow” on businesses you want to hear more from, which will send their alerts to your Updates tab, as well. Thankfully, there aren’t comments.

Google hopes the change will encourage users to visit the app more often in order to find out what’s happening in their area — whether that’s a new post from a business or a review from another user detailing some fun local activity, like a day trip or new hiking spot, for example.

The feature can be used when traveling or researching other areas, too, as the “Community Feed” you see is designated not based on where you live or your current location, but rather where you’re looking on the map.

The feed is the latest in what’s been a series of updates designed to make Google Maps more of a Facebook rival. Over the past few years, Google Maps has added features that allowed users to follow businesses, much like Facebook does, as well as message those businesses directly in the app, similar to Messenger. Businesses, meanwhile, have been able to set up their own profile in Google Maps, where they could add a logo, a cover photo and pick a short name — also a lot like Facebook Pages offer today.

With the launch of a news feed-style feature, Google’s attempt to copy Facebook is even more obvious.

Google says the feature is rolling out globally on Google Maps for iOS and Android.

Salesforce buys Slack in a $27.7B megadeal